Spring Sale 🌸 Your personal 56% OFF Annual Premium deal, save now!

6K resolution is only possible with fish-eye. Beware of fake 8K

New 6K videos are coming to SLR in the highest resolution possible thanks to SLR projection meshes based on the camera lens profiles for the most popular cameras. Now, videos are released in the original ZCam K2 Pro sensor resolution, producing a 5800x2770px 200º FOV stereo image that is marketed as 6K. For equirectangular projection the original sensor image is cut down to 5400x2700px in 180º FOV. 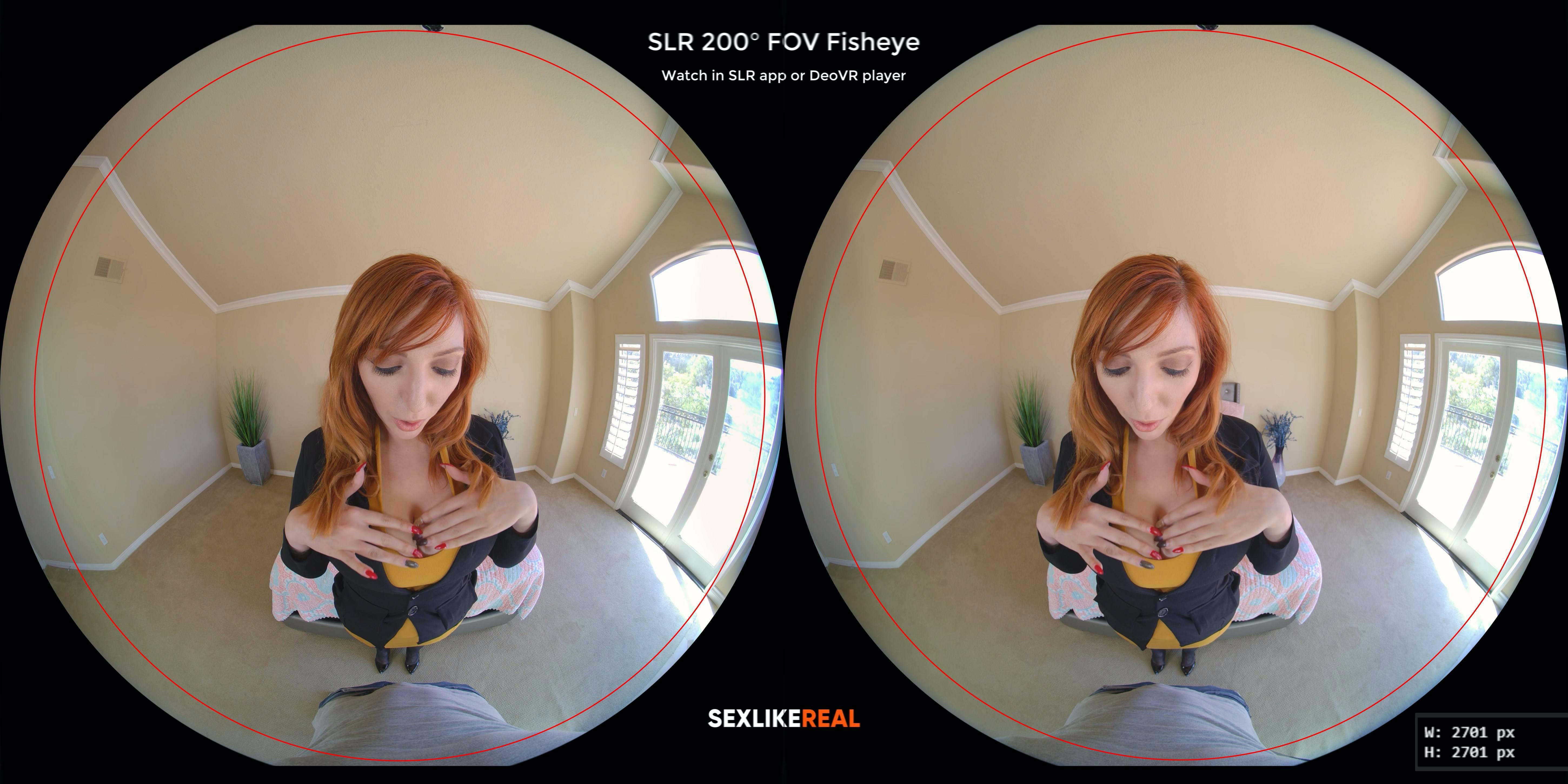 The red circle in the image shows how much extra visual footage is gained with fish-eye compared to the traditional equirectangular format. This picture can also be watched in VR, simply make sure to keep ‘_MKX200’ in the filename. That 10º extra from each view adds an incredible amount of immersion as it prevents the viewer from going outside of the visible area due to the natural head movements we do all the time. Another advantage of fish-eye is that fewer renderings are required in the workflow process, meaning the image quality is closer to the original raw files.

You can see this by comparing Lauren Phillips in the “Hard Sell” movie, from fish-eye footage to equirectangular. Check SLR for all the fish-eye videos. Every producer can also get their videos in 6K fish-eye by following this Mistika Boutique tutorial.

It is worth noting that some producers create ‘6000x3000’ (“6K”), ‘7200x3600’ (“7K”) or even ‘8000x4000’ (“8K”) equirectangular videos from the same 5400x2700 actual sensor image. These are merely upscaled images boosted with junk pixels that have no value for the viewer. Instead “6K”/“7K” and "8K" is barely useful as a selling point. Things get even worse, as the 5K version of the video, that would otherwise be the proper resolution, is of lower quality because it’s downscaled from the upscaled 8K files. See for yourself: upscaled 8K video vs original quality 5K footage.

It's thought that fake 7K/8K emerged with the release of the ZCam K2 Pro camera, which offered enhanced image quality. Having the same sensor resolution as its predecessor the K1 Pro, the K2 Pro is capable of much better image quality due to better sensor specs. Also, the K2 Pro offers 10-bit color vs the K1 Pro’s 8-bit color, has better performance in low light, better HDR, native h265 support and more. Some producers were tempted to overstate their camera upgrade with false advertising.

It will be even more notable now that actual 8K cameras are coming to the market, showing significantly improved quality compared to upscales.

On the SLR website we tag 5400px equirectangular videos as “5K”. Videos submitted by producers as “6K”/”7K” and “8K” are tagged accordingly. We’re unsure of the best way to deal with this issue. Ideally, we would like every VR video producer to render their videos at the original sensor resolution and not upscale.

Commentators have mentioned the useful impact of AI machine learning (ML) upscaling suggesting many examples on Youtube. However, none of the “6K”/“7K”/”8K” producers suggested the use of ML. Video upscaling is a basic feature of any video editing software and does not enhance image quality. You end up requiring more bandwidth, longer download times and your headset or desktop computer heating up for no reason.

While ML requires huge processing power and time to effectively upscale flat videos, it still can’t be used for high resolution stereoscopic videos because of convergence plane requirements. Simply put, ML would have to also respect the stereoscopic disparity between the left and right eye and the tech is simply not there yet. And once this tech does emerge it would be right and proper to tag it as “ML or AI upscaled”.

Please let us know your thoughts on this issue.

Update. Around the time of this blog post, CzechVR released an 8K video, believed to be natively recorded in 30FPS and later interpolated to 60FPS. It's the only known exception to this post.

Alex Novak
Alex Novak has always had a passion for technology. Always interested in exploring new frontiers, the avid gamer and sci-fi reader found himself drawn to VR and its endless possibilities. Alex is excited to see what the future of VR brings and how he can help shape it.
Discussion: 3 Comments
T
Premium User
Terrible 9 months ago
Actually, a lot of VR180 cameras (and both the ones that we use for our studio perVRt etc) shoot native 5760x2880 footage, which is actually even more native sensor pixels than the K2 pro sensor. Still, we are also switching to the K2 from September. But in the end, 4/5/6K sensor is not what really matters, lens quality is what matters. I'd rather watch 4K shot with a good sharp lens than 7K shot with a soft lens, as the lower pixel footage would look better than the higher pixel footage. We actually started shooting in 2017 with high quality fisheye lenses on 4K cameras, and that footage image quality still beats what we do now with 6K cameras, and I believe it would probably still beat even the current iZugar image quality (the only problem with that rig, was sync, lens alignment and a few other practical issues). Unfortunately, we all know what "marketing" imposes.. the pixel count is a number that sells better than the vague, not measurable concept of "image quality". About FOV though.. yeah that at first seems like a good thing, but in practice all headsets (except Pimax) only show 110 degrees, so having "the natural human FOV" is pointless right now. In practice, this only means that when you're in the headset, you have more pixels where normally you'd find the start of the black area, but in 99,99% of the cases, the subject of the video would never be there (as you can see above.. why do you really need to see more walls, window and ceiling? does it actually make any difference?)
4
s
Premium User
scar69 10 months ago
So if I understand this article correctly it mean that most of the current vr videos being promoted as 6k, 7k and 8k are AI upscaled with no benefits over 5K? A few studios are now doing 6K and 7K "remastered" versions of older videos that were originally 3200x1600...are they just upscaled trash? Is there any reason to choose these high res versions or should I stick to 5K? I have preordered the HP Reverb G2 and want videos that will get the most out of it. Thanks
0
d
darkhorny3630 11 months ago
This is awesome. I don't usually comment but just wanted to say I love hearing about the tech you all use and the process behind it, these blog posts are cool. Besides it being interesting it also really shows that you care about the quality of your content and the experience for your users. Thanks!
1

14,677 VR videos, 334 new scenes released last month
Watch these and other 14,677 videos with Premium
JOIN NOW
READ ALSO:
7 days ago
Get busy with your hot Latina girlfriend and the ultimate cute blonde in this wild new SLR Originals scene
Here’s your chance to have a party to remember with Chloe Temple and Camila Cortez in ‘Welcome Party with a Bang’, the hot new scene from SLR Originals. Your stunning Latina girlfrie...
14 days ago
Teach two nubile teens golf and a whole lot more!
In ‘Nude Golf’ you’re a professional golf instructor and you’re lucky enough to have two of the hottest pupils ever in Alexia Anders and Madi Lane. These beautiful teens are ke...
14 days ago
Have a wild foursome from the female POV in the hot new scene from SLR Originals
Time for something for the ladies in ‘Hoe Depot’, the awesome new scene from SLR Originals that puts you in the shoes of petite Asian beauty Avery Black. This is for all you women who love...
Categories
All
Top up
Top up $50 get 5% FREE
Payment options
Discreet and Secure